The Life of Walter Owen Bentley 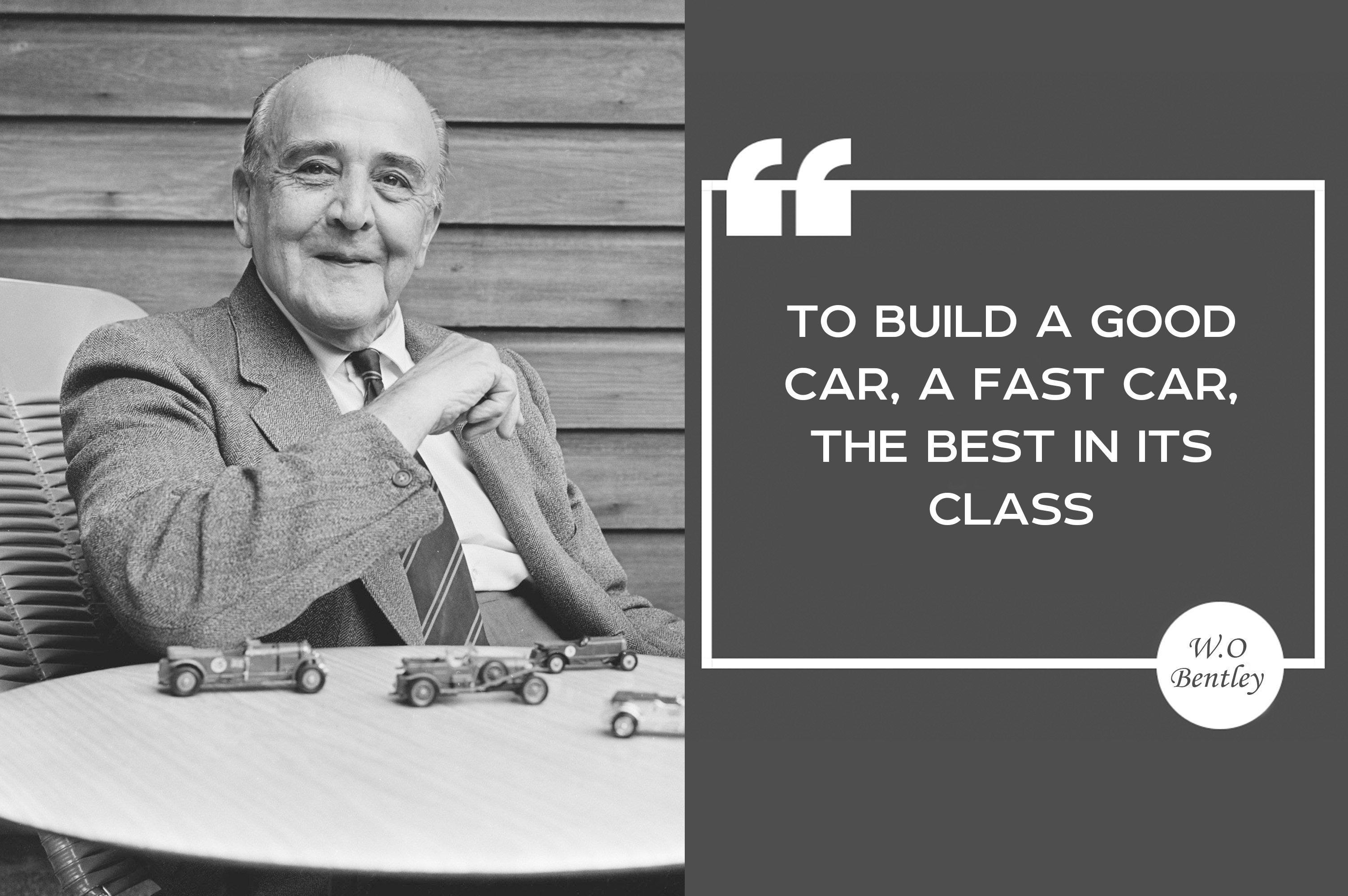 Engineer; designer of aero engines, designer and racer of motor cars, founder of Bentley Motors Limited in Cricklewood near London on 18th January 1919. He was known as "W.O." without any need to add the word Bentley. W. O. Bentley was born as the ninth child to Alfred Bentley, a British businessman and Emily nee Waterhouse on 16th September 1888. From 1902 to 1905, he attended the Clifton College, a public school in Clifton, Bristol. He left the school at the age of 16 and started to work as an apprentice railway engineer at the Great Northern Railway at Doncaster, Yorkshire. W. O. completed apprenticeship in 1910. Afterwards, he studied briefly theoretical engineering at King's College London.

In 1912 W.O. Bentley and his brother H.M., with their newly formed company Bentley & Bentley Ltd., which was specialised in selling the D.F.P cars (Doriot, Flandrin & Parant (D.F.P.) was a French car maker based in Courbevoie, Seine between 1906 and 1926). W.O. Bentley and his brother H.M., had acquired the British and Commonwealth Agency for the French-built Doriot, Flandrin et Parant motor cars. The French cars were imported as rolling chassis and sent out to London coachbuilders for bespoke coachwork. W.O. successfully campaigned the 12/15hp model in competition however worked closely with his French mechanic Leroux to develop still more power from this engine. The result was the 12/40hp Speed Model, built exclusively by DFP for Bentley & Bentley. Soon, however, he started making aluminium alloy pistons for the DFP engine. After the outbreak of the First World War, he started to build rotary aero-engines. Meanwhile, he also started to make plans for his own range of cars that would bear his name.

During World War I, he was a Captain in the Royal Naval Air Service, where he played a major role in improving the design and manufacture of Clerget engines for the Sopwith Camel and the Sopwith Snipe aircraft. These were known as the BR1 (Bentley Rotary 1) and BR2 and were made by Humber. For this he was awarded an MBE (Member of the Most Excellent Order of the British Empire), and an award of £8,000 from the Commission for Awards to Inventors.

In January 1919, Almost immediately after the end of the First World War, W.O. and H.M. founded their own car company, Bentley Motors Limited. H.M. and W.O. Bentley and H.M.J. Ward are listed as directors. In October of the same year the first Bentley is completed. The 3-litre is built in a workshop near Baker Street, London, and powered by a 65bhp four-cylinder 16-valve engine. The car is the first to carry Bentley's hallmark radiator casing and flying 'B' insignia.

In May 1923, John Duff and Frank Clement drive a privately-entered 3-litre to fourth place in the first 24-hour Le Mans race. One year later, the two drivers won Bentley the first Le Mans. However, the next endurance race was a disaster, while Bentley Motors Limited was in serious financial difficulties. Nevertheless, the victory at Le Mans convinced Woolf Barnato to help the company with its financial problems. The company was saved, however, W. O. was no longer a co-owner of the company but Barnato's employee.

In November 1931, with Barnato refusing to continue to finance the company and Bentley with a Receiver, Bentley was sold to the British Central Equitable Trust which was purchasing for Rolls-Royce. W.O. continued to work for Bentley after his former company was acquired by Rolls Royce but he was unhappy and left in 1935 when his contract expired.

In 1935, the Lagonda car company was bought by Alan P. Good, who outbid Rolls-Royce. He also persuaded W. O. Bentley to join Lagonda. He continued to work for Lagonda with Bentley touches to the engines. In 1938 the LG6 with independent front suspension by torsion bar and hydraulic brakes. Bentley's masterpiece was the V12 was launched in 1937. The 4480-cc engine delivered 180 bhp and was said to be capable of going from 7 to 105 mph in top gear and to rev to 5000 rpm. The Lagonda Rapide model power plant was a twelve-cylinder V engine developing 200 horsepower. In 1947, The company was purchased by Aston Martin. Production restarted with the last model from W. O. Bentley, the 1948 2.6-Litre. W O remained as an engineer at Aston Martin-Lagonda for a time, then he moved to Armstrong Siddeley, where he designed another twin-overhead-cam 3-litre engine before retiring. Armstrong Siddeley was a British engineering group that is best known for the production of luxury motor cars and aircraft engines. The production of cars ceased in August 1960. The company was absorbed into the Rolls-Royce conglomerate who were interested in the aircraft and aircraft engine business.

W. O. Bentley died at the Nuffield Nursing Home, Woking, on 13th August 1971. His widow Margaret lived until 1989. He had no children.