Increased Ethanol Content In Petrol: The Effects It Has On Classic Cars Whilst Left In Storage 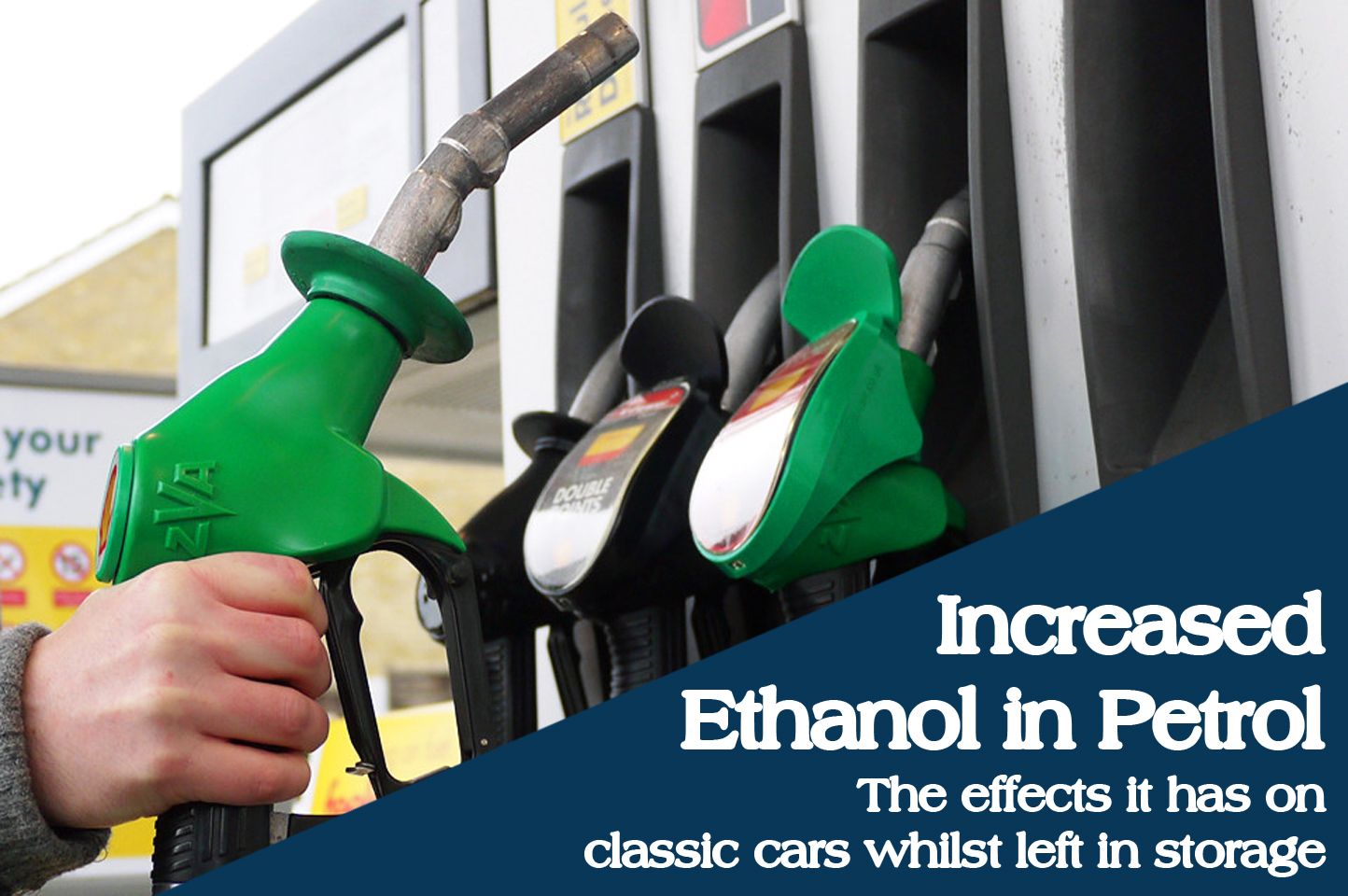 Increased Ethanol Content In Petrol: The Effects It Has On Classic Cars Whilst Left In Storage

The ethanol content of petrol in the UK is currently at 10% volume. In Europe, the 10% volume is virtually all that is available, and in the USA it is widely 15% volume with plans to increase the volume further.
Ethanol is a sustainable additive that is added to petrol to reduce pollutants released when the fuel is burnt during the combustion process.
There has been much talk during the past few years about the ‘side effects’ of ethanol in petrol and the ‘rumoured’ problems it can cause in fuel systems in older and classic vehicles, predominantly any petrol engine vehicle manufactured prior to 2000.

The Problem with additional Ethanol

As far as we are aware, the addition of ethanol in the fuel only really becomes an issue when vehicles are left inactive for lengthy periods - classic vehicles that are ‘put away’ for the winter being prime candidates.
The ethanol in the petrol absorbs water which has two consequences:
1. The water attracts bacteria that then creates corrosion in metallic components and can lead to the breakdown of rubber and plastic components that are in constant contact with the fuel during these periods of inactivity, especially if rubber hoses or plastic floats have not been changed for several years.
2. It can start a chain reaction that will create acidic molecules in the fuel when left to sit for lengthy periods.

All metals are affected - brass, copper, steel, aluminium, and stainless steel. The corrosion problem is increased when two dissimilar metals are in contact with each other whilst exposed to, or submerged in, ethanol content petrol. For example, the float bowls of SU carburettors where there is a steel stud threaded into the inside of the float bowl which is made from aluminium.
Two types of corrosion have been identified in the fuel systems of vehicles ‘laid up’ for extended periods with fuel still contained within their systems.
Galvanic Corrosion occurs where the ethanol fuel is in contact with two dissimilar metals, and it is this type that would be more prevalent in older vehicles ‘laid up’ for long periods.
Oxidation occurs when oxygen combines with molecules on the metal surface to create a metal oxide. This can then react with the previously mentioned acids created when water and ethanol mix.

Is there a solution to this problem?

There is no “cure-all” solution to the issues caused by high ethanol content in fuel when it isleft to sit for lengthy periods.However, there are two steps that can be taken to reduce or, in some cases, eliminate the problems for vehicles left in storage.

The FBHVC (Federation of British Historic Vehicle Clubs) and the HCVA (Historic & Classic Vehicles Alliance) acts as “the voice of the classic car industry” and plays a very prominent role in advising and lobbying the UK Government. We strongly advise as many customers and businesses as possible to join. More information is available here:
https://www.fbhvc.co.uk/news/article/fbhvc-clarifies-the-introduction-of-e10-petrol-for-historic-vehicle-owners
https://www.fbhvc.co.uk/fuels
https://www.hcva.co.uk/19/hcva-news

Check your vehicle is compatible with E10 petrol

The UK Government and the DVLA (Driver and Vehicle Licensing Agency) has since released information regarding cars that can use E10 petrol.