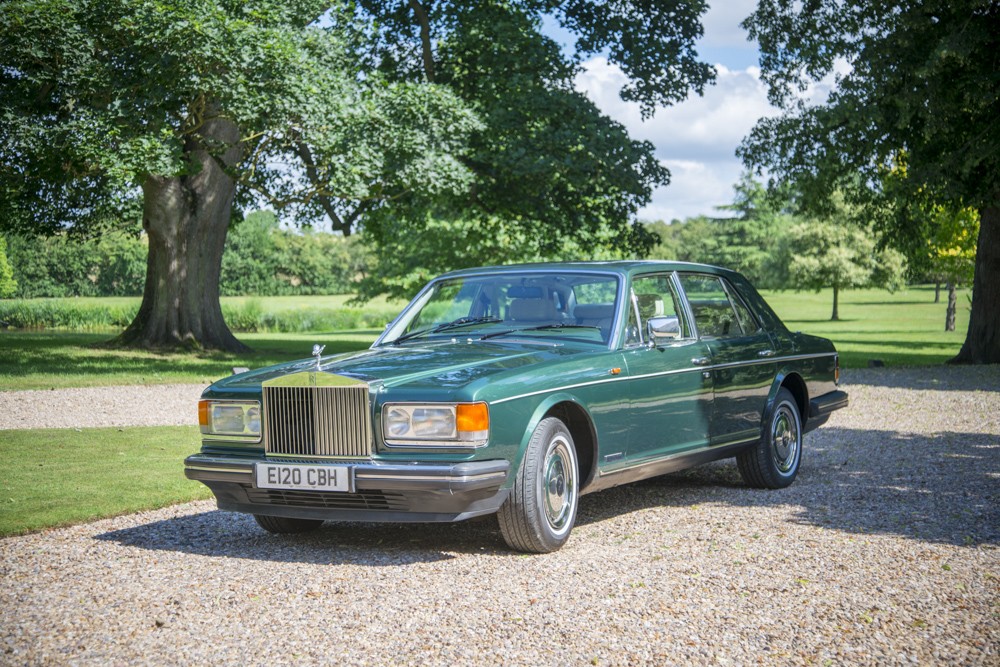 A brief guide to choosing your Spirit, Spur or Bentley derivative

In 1980 at the Nice Motor Show Rolls-Royce Motors finally unveiled their new models – the Rolls-Royce Silver Spirit and its stablemate the mechanically identical Bentley Mulsanne, the first of the SZ models. They replaced the SY models – the Silver Shadow and Bentley T Series that had been in production since 1965 with total build figures of just under 37,000 – the highest in the company’s history. The launch of a replacement range had been delayed by the collapse of Rolls-Royce in 1971. The knock-on effect was that the new model’s design needed to utilise many of its predecessor’s mechanical components in order to minimise costs.

The first models therefore retained the existing drivetrain including the 6.75 litre V8 engine mated to a 3 speed GM400 gearbox. Similarly, the running gear was virtually identical barring the introduction of a slightly wider rear track, mounted on a stiffer subframe with redesigned trailing arms and dampers. The exterior, however, provided the aesthetic changes that announced the launching of a new model – although only slightly longer and wider than the SY range, the cars looked larger due to a 30% increase in glass, lowering of the waistline, a flatter bonnet and squarer front and rear lights.

Initial sales of the early models were hampered by the worldwide recession but also because sales to a number of overseas countries including the USA (by far the largest export market) were delayed due to stricter emission controls. This meant that these export models were fitted with Bosch K-Jetronic fuel injection and EGR (Exhaust Gas Recirculation) systems. During the 1980s, however, sales increased in line with the brighter economic outlook. At the same time a number of model variations were introduced. Initially these were simply the LWB version of the Spirit – the Silver Spur, alongside the two door Corniche models which retained the same body but updated mechanics of the pre-1980 versions.

As early as the 1970s Rolls-Royce Managing Director, David Plastow, had been keen to introduce a higher-powered Bentley model to the range. His dream became a reality when the Bentley Mulsanne Turbo was launched at the Geneva Motor Show in March 1982. Its introduction is hugely significant, for whilst previous Bentley models were simply rebadged versions of the Rolls-Royce model, the Mulsanne Turbo represented an appreciation that an alternative, more powerful, sporty Bentley model could be extremely popular and offered a real alternative to the “standard” Rolls-Royce offering.

The success of this change in policy can be seen firstly in the sales figures; less than 10% of the sales of the aforementioned SY models represented Bentley badged cars. Indeed, there are numerous examples of cars from the 1950s and 1960s which were converted from Bentley S Types to look like Rolls-Royce Silver Clouds. Although SY and SZ model build numbers were very similar, over 40% of the SZ range are Bentley models. This trend continued with Bentley Arnage models outselling the Silver Seraph and, once the company had been split, Bentley continued to outsell Rolls-Royce on a large scale.

Although early Mulsanne Turbos were rather rudimentary with a 4 barrel Solex carburetter and running gear similar to the standard Mulsanne, it soon became apparent that improvements to the gearbox, driveline and suspension were necessary in order to cope with the increased engine power. These improvements led to the dropping of the Mulsanne name in order to create the first Bentley Turbo R (R for roadholding) in 1985. Sporting wider tyres, colour coded grille, front and rear spoilers, stiffer front and rear Anti-Roll Bars the Turbo R represented the blueprint for all of the Turbo models that followed and the improvement in the Bentley brand.

The standard naturally aspirated Mulsanne and the virtually identical Bentley Eight (introduced in 1984) remained as part of the range and were replaced by the Brooklands in 1993. The first major overhaul of the model range came in 1987 with the introduction of fuel injection and ABS across all models and countries. This was followed in 1990 by the introduction of active ride damping. Throughout the 1990s numerous mechanical changes and advancements were introduced.

1998 is widely regarded as the last of the true “British” Crewe built cars owing to the sale of Bentley and the Crewe factory to VW Audi and the Rolls-Royce brand to BMW (see . However, a small number of SZ models were built up until 2002, albeit with increasing amounts of mechanical components from the Seraph/ Arnage range.

In terms of how the cars drive, the very early Spirit and Mulsanne models are identical – very smooth with the more traditional “waft and wallow” ride. From 1984, however, the Bentley models, regardless of whether they are turbo charged or fuel injected, have a stiffer, sportier feel to them. Turbo charged and fuel injected models are understandably faster. Earlier cars are mechanically simpler - making them, in general, cheaper to maintain especially where electrics are concerned. Whilst the later models provide improved levels of comfort, speed and sophistication there are the obvious pitfalls of higher costs should any of the modern, more complicated systems fail.

The Solex carburetters of the pre-1987 Turbo models have a tendency to warp, which leads to flat spots when accelerating amongst other issues. We would not necessarily recommend avoiding these models as they are extremely quick but we would suggest getting a marque specialist to thoroughly inspect them. Having said that we would always recommend asking a marque specialist to check a prospective purchase over prior to parting with any money – see our list of Recommended Garages here.

Don’t buy the first car you see, take your time and look at several in order to be able to objectively compare them. Ensure that you look at the service history – maybe contact the last garage that serviced the car for an honest appraisal. Test drive the car and ensure that there are no warning lights illuminated. In our opinion the SZ range currently represent fantastic value for money. When you consider the price of these cars new and their current values, you are getting a lot of car for your money. Added to this is the fact that their prices have been low for nearly a decade and we are finally seeing values rise so hopefully you will be buying an appreciating asset.

Having said that the earliest models are now over forty years old – so be prepared to invest in them, As a rule of thumb in the UK we advise a budget of around £2,500 a year for servicing and ongoing maintenance. If you plan to do a lot of the work yourself, we supply workshop manuals and literature:

There are an increasing number of forums that provide helpful and free advice. We would also recommend joining one of the Owners’ clubs – either the RREC or BDC. Membership affords you a discount on purchases from us.

What to look out for

When viewing a prospective purchase, we recommend that you pay particular attention to the following:

Whilst the doors, bonnet and boot lid are aluminium and only generally suffer with oxidation around the handles and badges, the rest of the body is mild steel and does suffer. Take your time to walk around the car and pay attention to the sills, the lower rear wing section below the rubber bumper end caps, the bottom of the front wings and the rear arches. All cars are monocoque with separate front and rear subframes. However, the floor pans do suffer so it may be worth crawling underneath or lifting the carpets – damp here could indicate leaking windscreens or blocked drain tubes. Over-rugs look nice but are often fitted to hide the effects of water ingress.

Whilst we supply the full range of replacement panels be aware that bodywork is expensive. As with the SY models, the rear suspension trailing arms have a pan that the rear road spring sits in. These tend to collect water and rot from the inside. In the worst cases the spring will push its way through the pan. Check these carefully. Replacement pans are available and relatively inexpensive to replace:

Most of the exterior brightwork is stainless steel making it relatively inexpensive to remove and repolish. If buying a Rolls check that the seams on the radiator grille are not starting to split. On pre-1995 rubber bumper models check the rear rubber end caps. They are held onto the main rear bar with a steel bracket mounted inside the rubber – when these corrode, they cause the end cap to part company with the rest of the car!

As with the SY models, these cars are fitted with the Citroen-designed hydraulic braking and suspension system. The main difference being that, whereas the SY models use a high-grade DOT3 called RR363, the SZ models use a mineral based hydraulic oil. Being green in colour it is easy to identify if part of the system is leaking. Pay particular attention inside the front left hand wheel arch (below the hydraulic reservoir), as well as around the gearbox bell housing (indicative of leaking brake pumps) and also the rear dampers (just to the rear of the back of the sills).

Get somebody to sit in the back of the car. If the rear gas springs have lost pressure then this will make the ride (especially in the back) particularly harsh.

A full hydraulic service is required at 96,000 miles. If buying an older or high mileage car check that this has been done as the cost can run into several thousand pounds.

The V8 engine was first introduced in 1960. So by the 1980s Rolls-Royce had pretty much refined it to perfection and well maintained cars rarely give major engine problems.

Having said this, if you are looking at a later model from 1993 on, it would be worth checking the condition of the cooling system and looking for any evidence of head gasket failure. Ideally, they will already have been replaced. Bentley Motors have never admitted there is an issue on these later cars but there is! We suspect, though it has never been proved, that the radiator cores start to block causing the engine to suddenly rapidly overheat causing the gaskets to fail. In the last few years, the new OEM gaskets have been failing at an alarming rate. We are confident that our newly engineered gaskets offer a long-term solution. The same gasket is used throughout the whole range.

Electrical faults are very common. Whilst on the earlier models they tend to be more numerous (due to age), on later cars they tend to be more expensive to rectify, due to the complicated nature of the electrical and electronic systems. The simple rule of thumb is to check everything – every window lift, central locking, stereo, interior lights etc and whilst road testing ensure that there are no warning lights illuminated.

Prior to 1987 a Harrison A6 compressor was fitted to all models. From 1987 a Sanden was fitted. As with any car check that the air conditioning gets hot and cold. Repairs will be expensive but a well maintained and properly functioning system will work as well as any modern car. All parts are available but the costs of degassing, evacuating and regassing a system once an issue is evident can make any repair expensive.

Don’t forget to check the usual suspects as you would on a normal vehicle – the condition of the tyres and alloy wheels (if fitted). On road test listen out for bumps and knocks. Start the car from cold and from hot. Check the handbrake works correctly. Check the colour of the exhaust gas.

Good luck and we look forward to hearing from you once you have made your purchase!